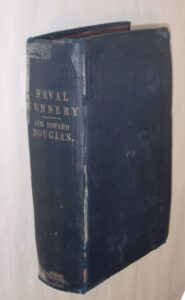 Whenever I come home from a book fair, I set my purchases aside for collation and inspection. If a previously undetected flaw emerges, it’ll be close enough to the time of purchase that the original seller will not be excessively inconvenienced by its return. Sometimes, however, distractions arise. When I returned from New York last month, I put all my purchases on a shelf, commenced collation and inspection, and then… I don’t remember exactly. There was a minor flood in the basement, the lawn needed mowing, a film crew arrived to do some gun stuff, I had to run up to Maine. In short, no shortage of half-assed excuses for not doing my job in an efficient manner.

In fact, it wasn’t until I started working on Maritime List 310 (coming your way in a few days, I hope), that I rediscovered my New York shelf. There were a couple of standards on it, such as Bligh’s “Narrative,” and an early American book on artillery, not to mention a few tasty bits of manuscript and ephemeral material.

But the real surprise was my rediscovery of a book I purchased Saturday morning at the Flamingo shadow show:

Fifth edition, revised, of a classic and influential text first published in 1820. It is an exhaustive work, covering theoretical, practical and tactical aspects of gunnery. Douglas was a prolific writer and his ideas were of such importance that the gunnery training ship “Excellent”was established in part as a result of this book. (See DNB). Douglas was sensitive to technological changes and this later edition takes into account improvements in the manufacture of gunpowder and the existence of steam-powered vessels in naval warfare. 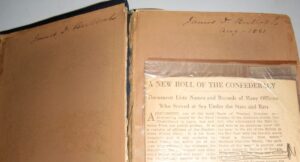 All well and good. But the most attractive aspect of this book is its powerful association. It is signed twice – on the front pastedown and the front blank – by James D. Bulloch, dated August 1861. This is a particularly significant date, because a contract was made between British ship builders John Laird Sons & Co., and Captain James D. Bulloch on August 1, 1861, for the construction of a 210-foot ship of war at a cost of ₤47,500.She was referred to as #209 when she was on the ways, But after launching she became known, and feared, as “CSS Alabama.”

Bulloch, a former US Navy officer, was the Confederacy’s chief foreign agent in Great Britain. As such, he oversaw the blockade runners and commerce raiders whose depredations provided the Confederacy with its only source of hard currency. He arranged for the purchase by British merchants of Confederate cotton, the dispatch of armaments and other war supplies to the South, and the construction and acquisition of a number of other warships and blockade runners, including the notorious Confederate raider “CSS Alabama.” On the verso of the front blank is a further inscription, “from the Alabama,” and on the next blank are two paragraphs of notes relating to specific aspects of gunnery related in the text. The last of these notes refers by name to the Douglas-inspired training ship “Excellent.”

Inside the book are dozens of marginal linings, many with manicules (pointy finger symbols) highlighting important sections of Douglas’s work. 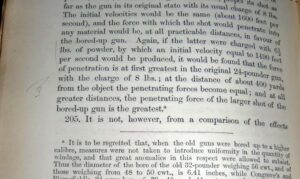 The book is bound as issued in publisher’s ribbed blue cloth, but it has seen hard use. The inner front hinge is nearly cracked through, leaving the text block on the verge of separating from its covers. An old newspaper clipping has been taped to the front blank, and there are two crude celotape repairs to the binding. An important association copy, in need of minor restoration. $750

A weekly blog of news, gossip, recent adventures and acquisitions, and deep thinking about the antiquarian book trade